Aniplex has uploaded on its Youtube Channel, a samples/tracklist video for Case Study of Vanitas / Vanitas no Karte / Les Memoires de Vanitas OST that comes out on February 23, 2022 with 54 tracks in total, on 2 Discs! Do remember that this soundtrack also covers the currently airing 2nd cour of the anime series.

thanks to Nightmare for the news!

By the way, the tracklist of the DEEMO Movie soundtrack is also out, but so far confirming only “inside a dream” and “nocturne instrumental” to be by Y.Kajiura, however, there is a rumor that she also handled all the non-game BGMs, but remains to be seen if its like that or not 🙂 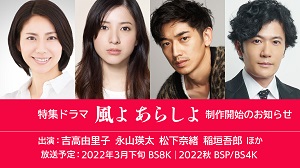 Yuki Kajiura‘s staff twitter account announced today that she wrote the music for the NHK Drama Special Kazeyo Arashiyo based on the novel by Yuka Murayama, published in 2020. The drama special is set to be aired on NHK BS8K in late March 2022, and then on BS Premium, BS4K in Autumn 2022.
Yuki Kajiura has previously written music for other live action documentaries (Rekishi Hiwa Historia) movies (Achilles to Kame) and dramas (Hanako to Anne) or specials (15 Sai no Shiganhei, Eien no Nispa), to mention the most recent ones.

About Noe Ito.
Noe Ito. Women’s liberation activist of the Taisho era.
A hundred years ago, with the power of a single brush, she challenged the institution of marriage and social morality head-on.
Her only source of inspiration was her overflowing passion.
She lived a life of unrestrained freedom and was about to blossom as a writer when unreasonable violence took her life at the age of just 28. Her life of bravely confronting the social contradictions of today, such as poverty and gender inequality, is once again powerfully shaking the current stagnation.
Based on the novel by Yuka Murayama, winner of the Yoshikawa Eiji Prize for Literature, and scripted by Mukoda Kuniko Award winner Koichi Yajima, the film features Yuriko Yoshitaka as Noe Ito, and depicts the “flame” of a woman who tried her best to protect freedom.

Synopsis
One hundred years ago, in the Taisho era (1912-1926), Raei Hiratsuka issued a proclamation stating that “from the beginning, women were the sun”, and rebelled against the strong tendency of male chauvinism. The women who applauded her began to speak out against society.
Noe Itoh, who grew up in the countryside of Fukuoka, rejected marriage to support her poor family and moved to Tokyo. With a thirst for freedom and overflowing enthusiasm, she supported Radao’s bluestocking company and eventually became a “young icon” of the times.
Her first husband, the Dadaists Jun Tsuji, left her, and she met her better half, the anarchist Sakae Osugi, and just as she was about to start to blossom, the Great Kanto Earthquake struck. Unreasonable violence strikes her…

thanks to Justisamuel for the news!

Today, the MV of Aimer‘s new song “Asa ga Kuru” ED of Kimetsu no Yaiba 2nd season Yukaku, composed by Yuki Kajiura, premiered on YouTube, and there are also subtitles on it 🙂

thanks to Justisamuel for the news!

Its New Year  In Japan (Happy New Year to everyone ! ☺️☺️) and ASCA published in her Youtube Channel MV of her upcoming song Kimi ga Mita Yume no Monogatari , composed by Yuki Kajiura, vocal ver of “starting the Case” bgm, used as theme song for the Lord El Melloi II special episode which btw aired tonight.

Thanks to grunty for the news !

Flying Dog announced on  twitter that the song Taiyou no Kouro by JUNNA that appeared at the end of the 12th and last episode of Fena: Pirate Princess, will be released tomorrow on December 22 2021, digitally).

In other news, on the 3rd episode of Kimetsu no Yaiba: Yuukaku-hen (10th if you count from start of S2) was spotted (at 13th and 18th min of the episode),  some new Yuki Kajiura bgm (she is co-composer). Eri Itou twitted about it. Yuki Kajiura  musician credits were shown  at the end credits of the 1st Yuukaku-hen episode some weeks ago.

Meanwhile, the 2nd  Limited Edition BD/DVD of  Kimetsu no Yaiba: Yuukaku-hen with eps 3-4, set to release on March 30, 2022,  will include Bonus CD with  “Music Collection Film Scoring Edition” with no composer separation, so its possible it will have Yuki Kajiura music inside.

thanks to Kagaribi no Hanabira, grunty, Nightmare for the news!