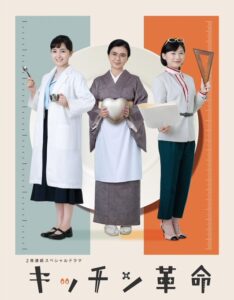 It was recently announced that Yuki Kajiura will compose the music for the 2 Nights Special Drama “Kitchen Revolution”, produced by TV Asahi.
The airing dates are:
Night 1: March 25, 2023 (Sat)
Night 2: March 26, 2023 (Sun)

In other news, today the fictionjunction.com website has announced the next Yuki Kajiura LIVE vol.#18, subtitled as “30th Anniversary” (from when Yuki Kajiura started her official composer occupation back in 1992-93!)

Thanks to Nightmare, grunty, and Kugayama for the new!
Happy New Year 2023 to everyone!

[Update 10/01/2023] The title of YK vol#18 was announced as “〜The PARADE goes on〜” (1)
And the vocalists as well: Vocal：KAORI・KEIKO・YURIKO KAIDA・Joelle・rito・LINO LEIA

The Princess Principal official website has updated with info about the 3rd movie of the “Crown Handler” series. It will be screened on the japanese theaters starting April 7th, 2023! Here is the PV:

thanks to Decretum for the news!

Highway Star YT channel updated with promo for the streaming of the Yuki Kajiura Live vol.#17 ～PARADE～ that will happen on November 1, 2022 (see here for more details). The trailer features all 4 regular FJ girls, and the new ones rito and Lino Leia (who sounds like Wakana :O) and Hanae Tomaru as guest, and  Hikaru as secret guest.

thank you yuki.n for the news!

In other news, yesterday the Yuki Kajiura staff twitter announced that The theme song “Soukyu no Fanfare” by FictionJunction feat. Aoi Eir & ASCA & ReoNa, written by Yuki Kajiura to commemorate the 10th anniversary of the anime “SWORD ART ONLINE,” will be released (digitally) on Friday, October 28!

What lies beyond this sky?

It was a time when the sky still belonged to dragons with giant wings.
In the Republic of Sylvana, where the memories of the fierce war that broke out with a neighboring country a few years ago are still fresh in the minds of the people, there were those who challenged the speed of the dragons in an attempt to wrest control of the sky from them.

Karl Schnitz, a pilot with exceptional piloting skills, was the first in the world to fly a jet-powered aircraft, the Blitzvogel. He challenges the unprecedented realm of flying at a speed that exceeds that of the fastest dragon, the Kaiser Drache.

This is the story of one man’s dream to seek and fight for freedom.

Thanks to Lorde-Kowz and Nightmare for the news!

On August 25 was announced that the final performance of the Yuki Kajiura Live vol#17 tour Parade on August 12, will be screened on certain venues in Taiwan (1) and Hong Kong (1, 2)!

In other news the Kazeyo Arashiyo TV drama that Y.Kajiura composed for has finally started to air on japanese TV and the first trailers (1, 2) (and episode if you know where to look) are out!