Today was the last day of the “Yuki Kajiura Live vol.#17 ～PARADE～” tour and at the end the new FictionJunction album that was previously hinted for release this year was finally announced! The album with be -unsurprisingly- called “Parade” and will be released on April 19, 2023.  Its the first album  of the solo project since “elemental” released in 2014, 9 years ago. The album will have the regular 4 girls  Joelle Kaori Keiko Yuriko Kaida, as well as the 2 new vocalists rito and LINO LEIA, who were discovered in the “Yuki Kajiura/FictionJunction Project Vocalist Audition“. Also for the first time FictionJuction releases this album with SACRA instead of Flying Dog. 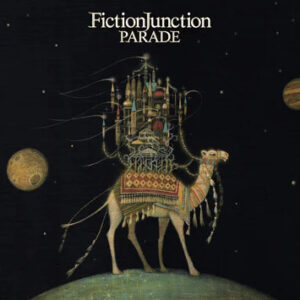 There are 2 confirmed songs so far:

There will be 2 editions of the album, a first press Limited Edition and the Regular:

How to register
Tickets will be sold through the e+ system.
(Note: unfortunately in order to book ticket and watch you need to have a japanese phone number as well as a japanese credit card)

e+ membership registration (free) is required at the time of application.