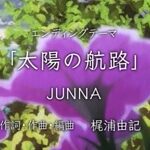 On the 12th and final episode of Fena: Pirate Princess / Kaijoku Oujo a new Ending Theme song by JUNNA composed by Yuki Kajiura appears, titled 太陽の航路 (Taiyou no Kouro = Route of the Sun). Its still unknown how the song will be released (single/album/ part of the soundtrack?)

In other news, according to ANN and the Deemo film website:

– The film’s theme song by Yuki Kajiura (the japanese version) will be titled nocturne and will be performed by the audition winner Hinano Takashima. (Do remember that the kajiurago version, that was used during promos and as sample during the audition, was titled inside a dream  and performed by Joelle)

– The movie is scheduled for theatrical release on February 25, 2022 and will be screened in Shinjuku Wald 9 and other locations throughout Japan.

thank to grunty for the news!