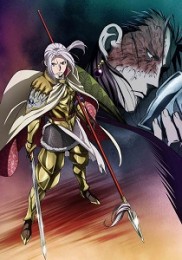 The Kalafina and Arslan Senki websites have announced that Kalafina is responsible for the Ending Theme of the Arslan Senki 2nd season “Fuujin Ranbu” !! Last Kalafina involvement with the project was last year when they did the ED 2 “One Light”.

Aoi Eir, who performed the first ED of the first season, will return as well for the Opening Theme this time.